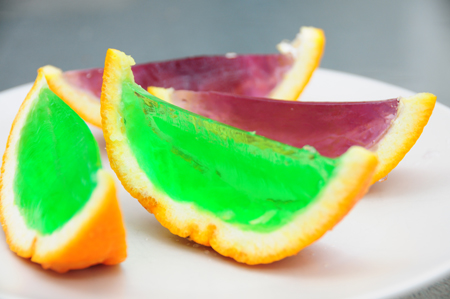 I made these gelatin treats in an orange peel for my daughter’s second birthday party. They were perfect for toddlers and the bigger kids thought they were pretty cool too. 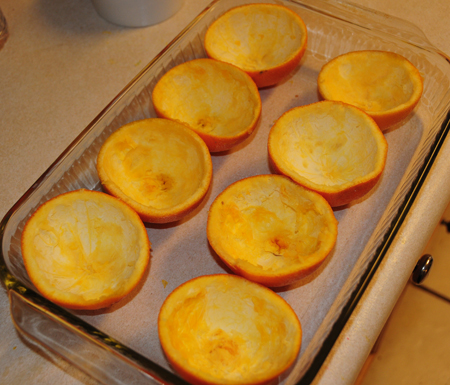 Start with whole oranges, cut in half. Cut them with the base of the orange on the bottom so that the orange will be stable and can “stand up” after it’s cut. I used a glass dish (would be a good idea to line with paper towels).

Take a sharp knife and cut around the edge of the orange peel — right where the white is. You can to leave the white, but take out all the orange. This part is messy and tedious. Be careful how hard you push the knife — you are bound to slice a hole in one or more oranges.

Save the orange segments and have your kids eat those while they wait for the finished gelatin product to set up. You can also squeeze all the orange pieces to get a great glass of OJ! Nothing goes to waste in this project.

Next, prepare the gelatin according to the package instructions. I used two Jell-O packages, one lime Jell-O, one berry flavored Jell-O. One regular sized package filled about 4 orange halves. After the gelatin is ready (gelatin dissolved in hot water, then cold water is added), pour it into the orange halves. Set your tray in the refrigerator to set for a few hours.

Take the orange halves out of the refrigerator and slice into quarters. I tried to do eights and had some success, but it was hard to cut them that small. 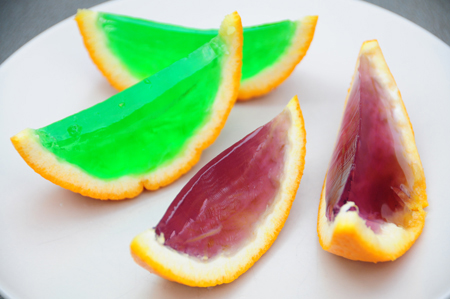 They are wobbly, jiggly and totally fun! The kids ate them up — and some of the adults did too! My only complaint is that I did not make more of them.