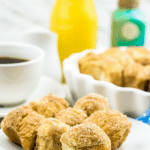 Cinnamon donut holes are king in our house. I love cinnamon donut holes because they are bite-sized I feel like I can either have more than I would if they were full-sized donuts, or I can opt to have less and feel satisfied that I had a donut!

his baked cinnamon donut hole recipe is the easiest donut recipe you can ask for. And, they’re baked, not fried, so it’s better for you! Another cinnamon-sugar recipe we love that also uses canned dough is our churros recipe.

One recipe makes an entire pie pan of baked donut holes. I use cinnamon and sugar to coat mine and they’re perfect.

This plate of donut holes will be gone in no time!

Be sure go grab your free copy of our Easy Canned Biscuit Recipe ebook. It contains several sweet recipes – all starting with canned biscuit dough. These are some of our most popular recipes!

I’m a sucker for breakfast treats. Well, treats of any kind. And, this recipe is just too easy not to try. Perfect for a busy working mom.

I bought all the ingredients (there are only a few):
I make these so much now that I keep a can of the biscuits in my refrigerator so I can make these any time.
The first time I made the cinnamon donut holes, and then posted a picture of them on Instagram. I got several requests for the recipe. It’s almost embarrassing, really. Hardly a recipe, but I’ve made them again, and again, and they are scrumptious every time.
The perfect treat for a weekend morning – or even dessert! 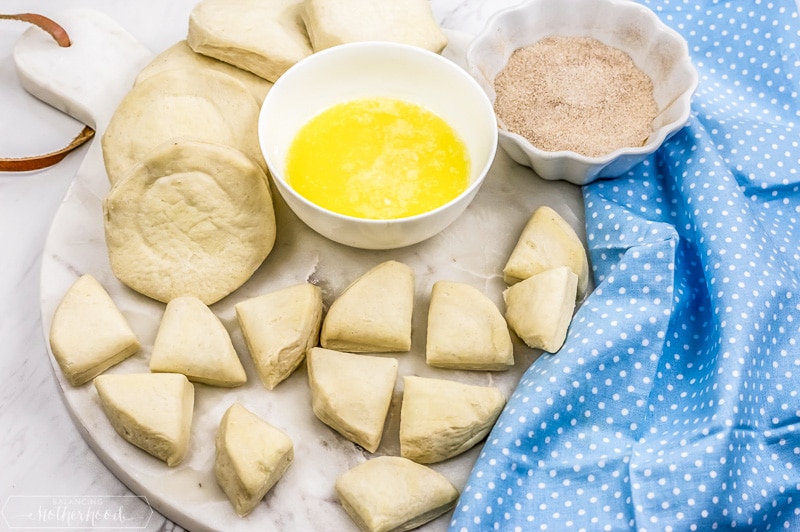 Here’s the super hard step-by-step donut hole recipe. I mean, people, this is hard. Open the can of biscuits. I usually give it a good whack on the side of the counter. I learned this from my mother.

I used a can of “jumbo” biscuits, but it doesn’t really matter how many are in the can. Separate the biscuits and cut them into quarters with a knife.

Take each quarter biscuit and roll it into a ball. I put it in the palm of one hand, and cup the other hand on top, rolling until I have a ball.

Melt the butter and dip one ball into the butter, then roll it in a mixture of cinnamon and sugar. Coat heavily. I like a thick coating of cinnamon/sugar.

I like a heavy coating of the cinnamon sugar mixture.

Just keep adding the coated donuts to the pie pan. You can put a lot of donut holes in this pan. That’s the beauty of this donut hole recipe – you really can’t get it wrong.

Just put them in so they aren’t squished, but nicely set against one another.

Then place each coated ball into a baking dish. I used a dark cake pan for one batch, but this time I used a glass pie pan. It looks so much nicer in the pie pan, but you can really use any type of pan you like. I like a shallow pan that is only one layer, but you could pile these things on top of each other if you want to.

Once you’ve dipped your last donut, place the pan in the oven and bake away. The end result if a slightly toasty outer crust, and a flaky and moist inside.

Serve warm with a nice, big cup of coffee or a cold glass of milk. Be sure you take the first bite, otherwise you may not get one: they’re that good. These things will be gone in minutes!

These donuts are light and flaky and pull apart nicely. 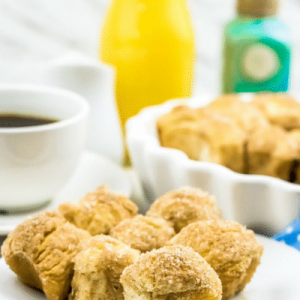 Depending on the biscuits you buy, you might prefer to follow the baking instructions on the package. i.e. 375 for 11-15 minutes. Just make sure the biscuits are cooked through. Pop them back in for a few minutes if they aren't done enough.

Here’s another popular recipe that’s easy to make – you can have these maple bacon cinnamon rolls in less than 30 minutes!

Once you make the cinnamon donut holes, or those maple bacon cinnamon rolls, you’ll want to try these boston creme donut holes! They are seriously good and also made from the canned biscuit dough. Try it!