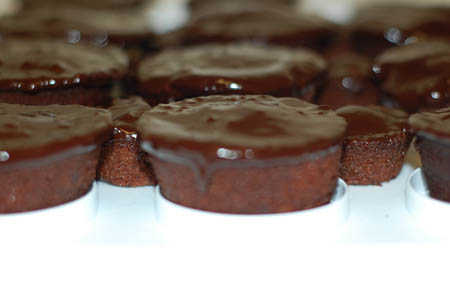 I made Ina Garten’s famous chocolate ganache cupcakes tonight for a ladies night that I am attending tomorrow. It was a lot of work, but they taste amazing. I don’t recommend making these or any new recipe for an event, but here are some tips I learned tonight:

Lesson: Don’t attempt a new recipe that you actually need someone to eat. It was stressful to make these, knowing that I had to deliver them to people to actually eat. I know better than to try something new to bring to a party. Always go with a tried and true.

Lesson: Don’t double this recipe. Make one batch, then make another. I wanted to bring 12 to the party and leave 12 at home so I doubled the recipe thinking I’d save time. Instead, I had chocolate everywhere because it wouldn’t all fit in the mixing bowl.

Lesson: I baked these for 25 minutes and thought they needed to cook longer. I put them in for 5 more minutes. Wrong! Some were overcooked. Some were fine, but I think they would be perfect with less time.

Lesson: Ina says to fill the cups pretty high because “these cupcakes don’t rise much.” Wrong. I filled them nearly to the brim and each cupcake rose enough to spill onto the top of the pan. Next time, I’ll fill 1/3 of the way.

Lesson: Coffee makes a difference. In one of Ina’s episodes last year she did a series of tests, she used this cupcake recipe to see if adding instant coffee granules makes the cupcakes taste more chocolaty. Yes, yes, yes! The official recipe currently on Foodtv.com doesn’t say to add coffee to the cupcake mix, but do. Add it there and in the ganache. You will be able to taste a deeper chocolate flavor. This is where the yum factor really comes through.

ABOUT ALICIA: Alicia is the founder of Balancing Motherhood.com. Last year, she managed to stay sane while completing an MBA, working full-time, blogging, and still baking amazing birthday cakes — all while raising a young family at home.
« Tiny Feet In the Sand
Green Photos »