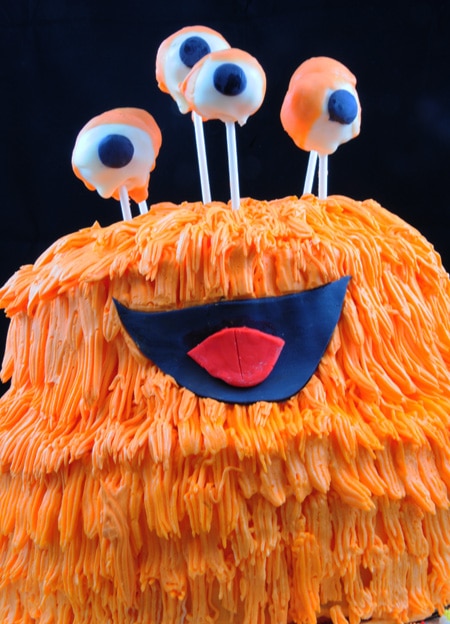 Months ago my son said that he wanted a two story orange and pink cake for his birthday. That was the criteria: orange and pink, two tiers. HMMM. What on earth am I going to make, I thought. 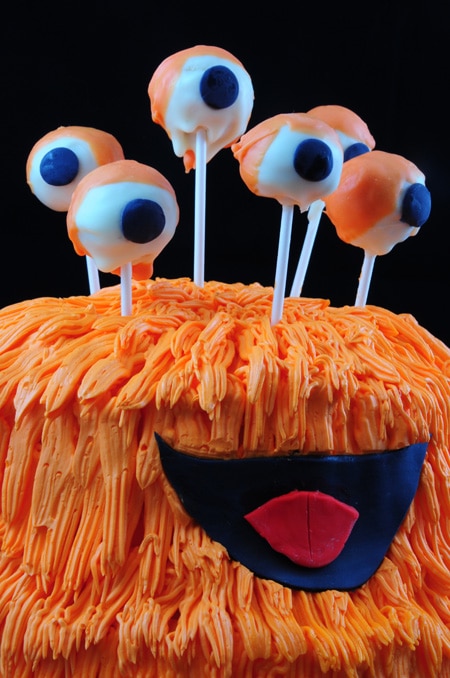 I started Googling “orange birthday cake” and found this beauty on Bakerella.com.Â  “That’s it!” 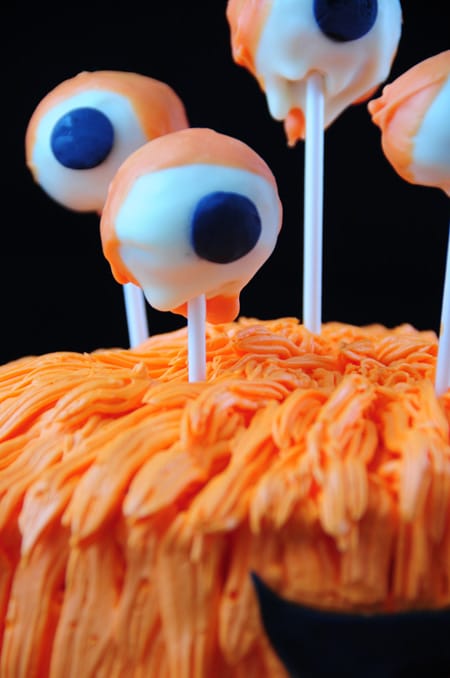 How can you resist the cake pop eyeballs? 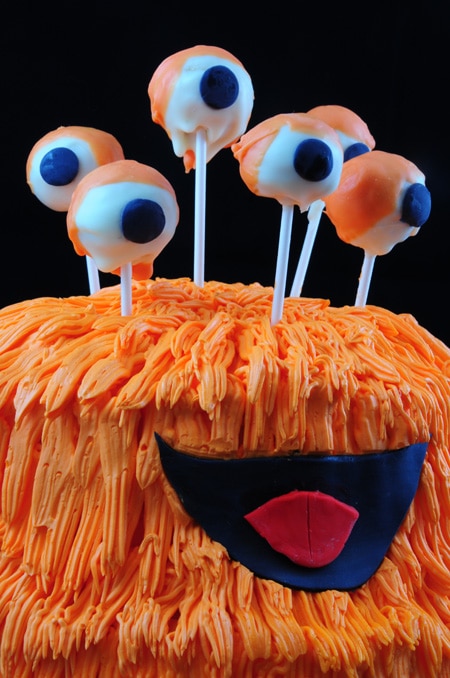 Six. One for each year. 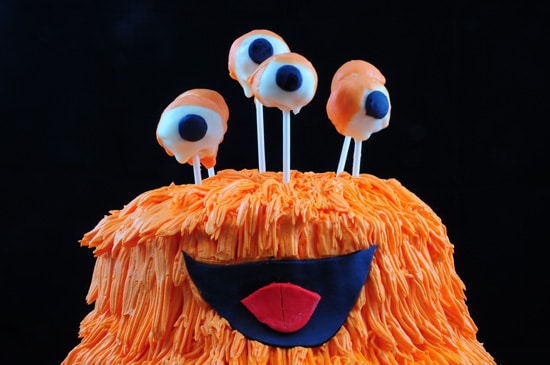 He’s just so cute. I can’t even stand it. 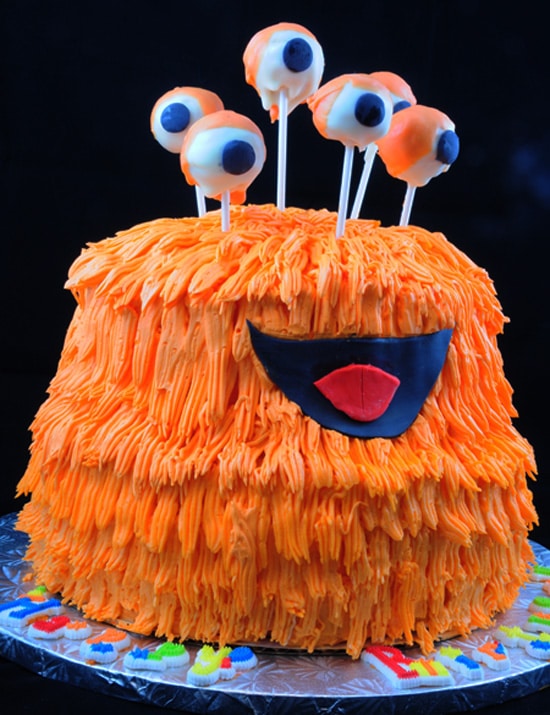 I took some liberties with the original inspiration in order to accommodate the “two tier” request from my son. This cake has four layers of cake — two on the bottom and two on top. It also has about four batches of Italian meringue buttercream frosting. That’s a lot of butter folks. 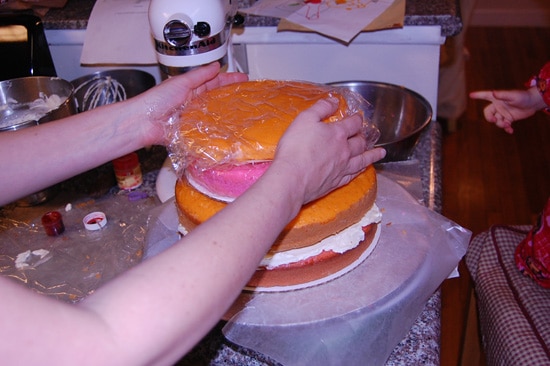 Here’s how I put it together. I made four cake rounds … two 10 inch and two 8 inch. I put the two 10-inch ones on the bottom with buttercream in between the layers. Then, I put the two top layers on. This is what I call somewhat of a dry stack — where I place the layers to see how high the cake is going to be. This tells me how much frosting to use in between the layers. More frosting if I need more height, just a little if I need it to be smaller. 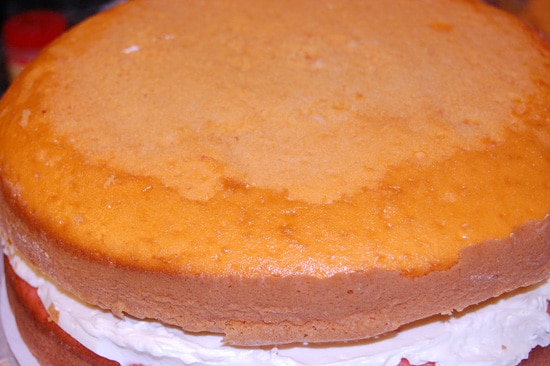 I leveled the top of the bottom tier by holding a serrated bread knife horizontally and just trimming away. There are fancy leveling tools out there, but I just eyeball it and slice away. I left the corners rounded to give the alien a softer feeling around the edge. 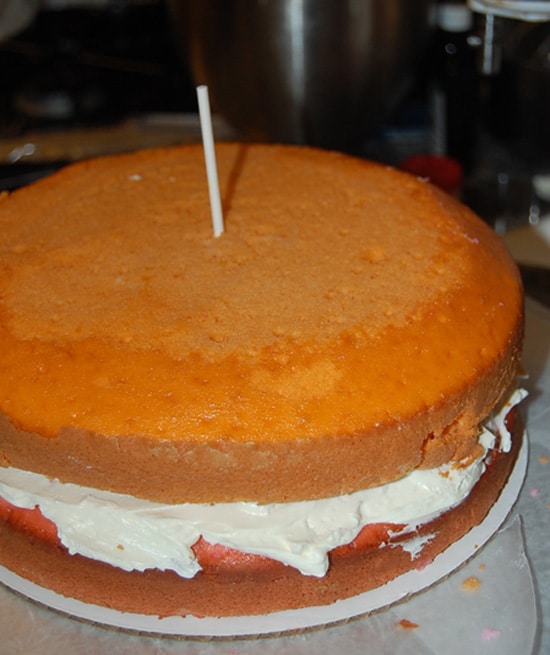 I removed the top layers from the dry stack and placed the supports into the bottom layers. I used cake pop sticks. Brilliant, I know. I put one in, marked it with a pen, then snipped the extra off. I used this as the guide for the other 5 that I used. Then I just put them in the cake, spread apart enough so that they will support the top layers. 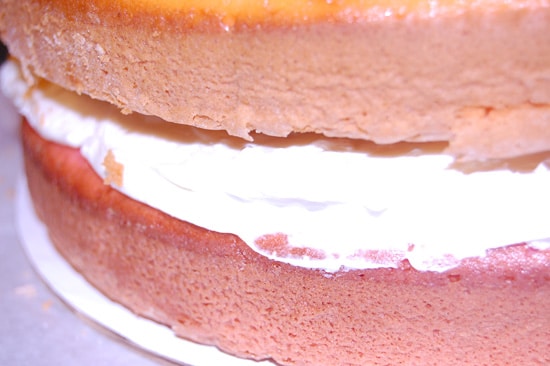 Here’s the bottom tier before I frosted the sides. I put frosting in the middle of the layer, there are big gaps on the side. Not to worry. Just shove a lot of butter cream in there. Shove it in. Be generous. Then, frost the sides and top of the cake. 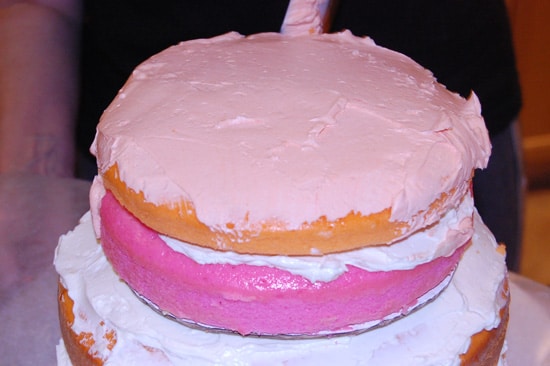 I used two different colors for frosting for a simple reason” I didn’t want to have to dye every batch of frosting bright orange. Plus, the inside of the cake is where I put the pink! I layered pink and orange cakes and wanted white frosting to peek out from inside and make the pink and orange colors pop. 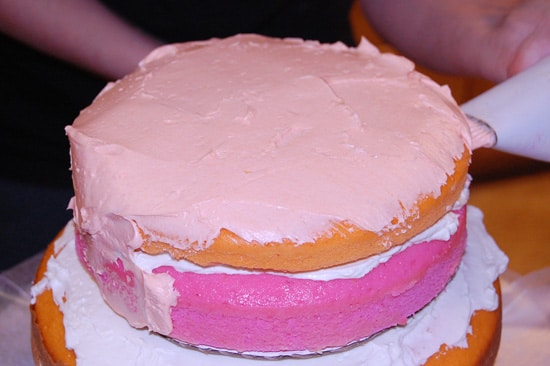 On the outside I put a layer of light orange frosting to be the base of the cake. This is the crumb coat. 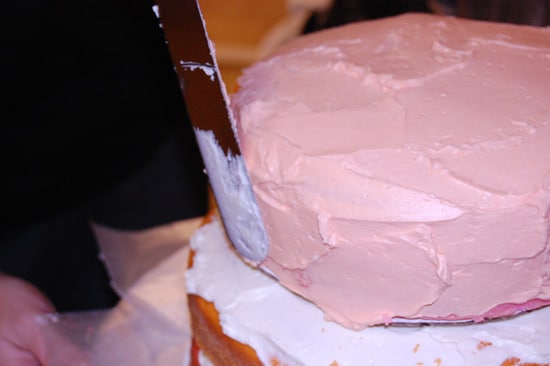 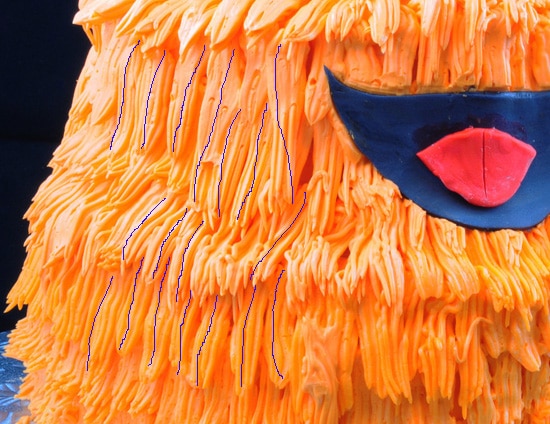 I have added lines in blue to show some of the fur and how I put it on the cake layers. The blue lines represent one layer of piping from the pastry bag. Each layer overlaps the layer below. I used a grass tip on my pastry bag. Here’s what I did:

Then, go about the same distance above the current layer of fur and do the same motions. Start 1-1/2 inches above the current orange patch of fur, drag down — this time overlapping the top of the first layer. Go all the way around the cake again. I have an awesome turntable cake stand that I used for this project. I would have been miserable without it.

Repeat this pattern until you reach the top of the cake. And, let me tell you, it’s a long way to the top of this cake!

Once at the top, just work in circles until you reach the center of the top of the cake. 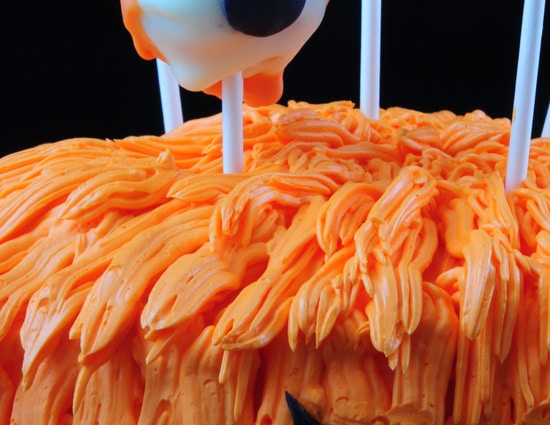 And, as I said before, this cake takes a LOT of frosting. 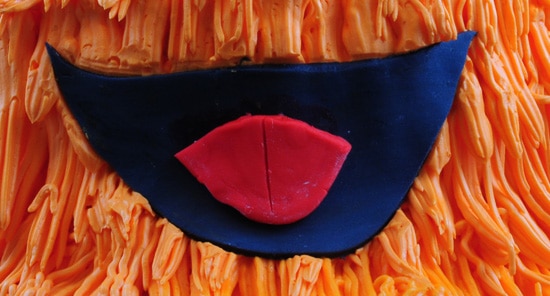 The mouth was super easy. I colored some store bought fondant, rolled it flat and cut out a mouth shape. For the tongue, I did the same with red fondant, then used a tab of water to seal it to the black mouth. Once the tongue was on the mouth, I simply placed the mouth on the cake and pressed it into the fur. Nothing else was needed to get it to stay in place.

The eyeballs — these were the kids favorite parts and my least favorite to make. The frosting was a bear to put on this cake, but it was a piece of cake (HA!) compared to making these cake pops. But, if you have done cake pops before, these would be super easy. Here’s how I made them:

Make your cake pop from your favorite recipe. I used Bakerella’s recipe. 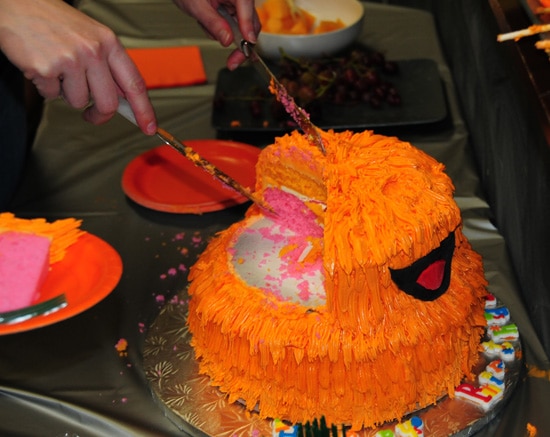 You almost hate to do it, but eventually you have to cut into the cake. It’s a sad state of affairs, but it’s got to be done. The kids loved the pop of color on the inside. And, I was able to get pink into the cake after all.

If you make this cake I recommend making extra cake pop eyeballs. All the kids wanted one. Luckily, I had made triple the number I needed on the cake just in case some broke in transport. Non did, so I had plenty to hand out to the kids.