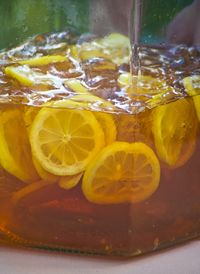 This summer my son participated in a lemonade stand that raised more than $400 for a local charity. We were so proud of him for taking part in this charitable act of giving. He thought it was all fun and loved squeezing the lemons to make the home-made lemonade. It got me thinkingÂ  about how we can instill in him the good will of giving.

Tonight on the evening news, ABC featured a 7-year-old girl, Isabelle Redford whose done just that. She’s found a way to take her talents and raise money for a noble charity. She makes and sells greeting cards — to the tune of $10,000. Yes, that’s $10K. Enough to purchase two orphanages in other countries.

It started with a simple act of selling the greeting cards at garage sales and turned into a much larger project.

Helping orphans has become Isabelle’s cause. It started two years ago when she was 5. Her mom, Kelly Redford of Parsons, Kan., told her a story about twin girls in Haiti whose mother died during childbirth.

“She immediately looked at me and said, ‘What can we do, we have to help,'” her mother said.

Isabelle said, “I brainstormed and I thought of a way to help them. … I thought of cards because I love to draw.”

Read the full story about Isabelle’s gift of giving. It’s inspiring and may give you an idea of how to teach giving within your own family. Who knows, it may just start with a lemonade stand.

ABOUT ALICIA: Alicia is the founder of Balancing Motherhood.com. Last year, she managed to stay sane while completing an MBA, working full-time, blogging, and still baking amazing birthday cakes — all while raising a young family at home.
« Fourth of July Photo Frame — Free Download
Hand-Me-Downs Are Chic New Apparel »