Home » Kids » Are Cooking and Baking Just for Girls? 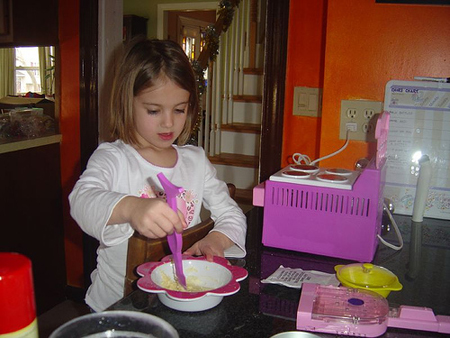 I’m not a good cook. Partially because Food TV didn’t exist when I was growing up, but mainly because I didn’t want to learn how to cook. I tried desperately to not confirm to the mold that the woman had to cook. I figured if I didn’t do it well, I would have to do it. I never had an Easy Bake Oven, nor did I want one. To me, it represented the typical stereotype of the traditional woman’s role at home.

My mother forwarded me an interesting article from the “Pittsburgh Post-Gazette” newspaper about kids and cooking. It has stuck with me and makes me quite irritated. Is cooking and baking just for girls? Yes, say major manufacturers of children’s baking toys, according to the article.

The article, entitled, “Boys at home in the kitchen: Yet makers of cooking-related toys still market almost exclusively to girls” discusses the growing number of boys who are interested in cooking and baking, yet how everything is marketed to girls. They cite the popularity of cooking for boys is because of shows on television that feature men like Duff Goldman from “The Ace of Cakes.” He’s a tattoo-d, goatee-wearing, manly man, who bakes cakes for a living.

Mr. Goldman had Easy-Bake Ovens when he was a kid. So did Rick Bayless, recent winner of “Top Chef: Masters” and chef and co-owner of Chicago restaurants Frontera Grill and Topolobampo.”

Back when Goldman wanted a toy oven, I’m sure it was unusual for a boy to have a typical girl toy. Fast forward 20+ years and nothing has changed — a boy today who might want an Easy Bake Oven must get one that has a girl featured on the front of the box, thus telling that child that it is, essentially, a toy for girls. What’s worse is that the marketing on the Easy Bake Oven Web site states that it is, indeed, for girls.

There is so much wrong with this picture and I get infuriated when people make these assumptions about what a boy should want to do and what a girl should want to do. Why not have a photo with two kids (a boy and a girl) on the front of the box?

Boys and girls need to be able to grow up being whatever they want to be.

What do you think?

ABOUT ALICIA: Alicia is the founder of Balancing Motherhood.com. Last year, she managed to stay sane while completing an MBA, working full-time, blogging, and still baking amazing birthday cakes — all while raising a young family at home.
« One Word Resolutions
Living With What You Have »