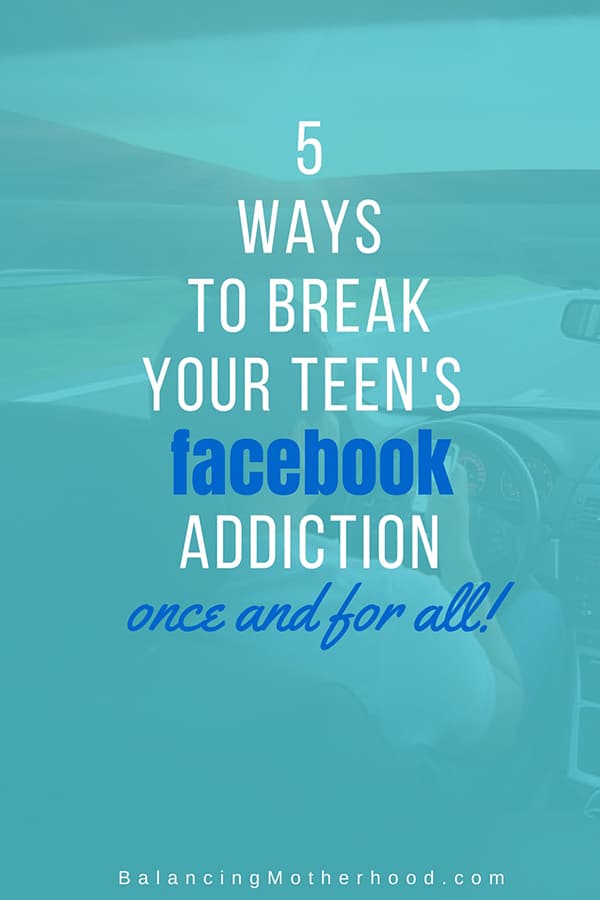 Social media, the internet, and technology is unavoidable these days. It seems that everyone is tweeting, blogging, snapping, and Facebooking their lives. Many kids and teens know nothing different than a life constantly in front of a screen. It’s easy to become a Facebook addict.

How hard would it be for a teenager to quit Facebook for a day? A week? A month? It’s hard enough for adults to set limits, but add in peer pressure and it’s gotta double the challenge. Good Morning America ran a spot about how some teens are absolutely addicted to social media. One girl who was featured, used the site as many as six hours on a weekend! It was causing fights with her mother and her grades were slipping.

What’s a Parent to Do if Your Teen is a Facebook Addict?

We must help our teenagers and young children know and understand the implications of being addicted to social media. I use the word addiction, but let’s be honest here … it doesn’t have to be a medical addiction to be an issue. CNN has 5 questions to see if you think you or your teen is addicted to Facebook.

Last week my family took a screen-free challenge. It was eye opening to see how much technology we face every day. It’s hard to avoid, and sometimes can become addicting. I’m no psychologist, but realize there are times we need to intervene and help our kids. Here are some ideas on how to help your teen break his Facebook addiction –  once and for all.

Real Simple magazine has a great idea to do a Facebook-free weekend. This is a great way to start to change bad social media habits. Don’t use any social media all weekend. This is an opportunity to help you teen realize how much he or she uses social media and what they might be missing out on in real life. Do something fun as a family to keep them distracted from their device (and don’t let them have it for the weekend). The idea is to not have them sulking around wishing they had their phone all weekend. You want them to be having fun so they aren’t even missing the device.

Begin by restricting use of social media in obvious places like the dinner table, bathroom, or bedroom. The bedroom is key here: Teens are smart and technology has changed since we were young. Phones are used as alarm clocks, sound machines, calculators, research tools … literally almost anything. Teens will give you every excuse why they can’t sleep without their phone so be prepared for that argument and be prepared to by him or her a regular alarm clock!

Limit how long your teen can be on Facebook every day. It might be hard to say, “you can only have one hour a day.” That’s hard to track. A teen could easily turn that into checking Facebook 20 times a day for 5 minutes each time. Instead, limit the frequency they are allowed to check Facebook. It might be something like: you can check it before school, after school and once after dinner. It might also include a day with no social media.

Restrict your teen’s device from allowing notifications to alert them that someone has replied to a comment, or sent a message through Facebook. By turning this notice off, you will remove the temptation to check Facebook because they won’t hear the “ping” every time someone responded.

Restricting social media will seem like torture so it’s key to find a communication and reward system to teach your teen the benefits of these new restrictions. The reward is up to you, but maybe after the first successful week, there is something the teen gets to do in recognition of his or her effort. Maybe after a month it’s something else. It’s important to keep communication open and not turn this into a negative experience they are going to assume it is. After all, you aren’t taking it away. You are simply training them to be more aware of how and why they are using it, and not falling into the trap of having to be on social media because they are afraid of missing out.

Teaching your teen now  and giving them a greater understanding of the how’s and why’s will prepare them for life with technology once they move outside the home. Social media isn’t going away, so we need to give our kids tools and teach them personal responsibility now so they can handle social media and technology in the future.

Have you gone screen free with your family? If so, what was the hardest part and what do you recommend to help other families?